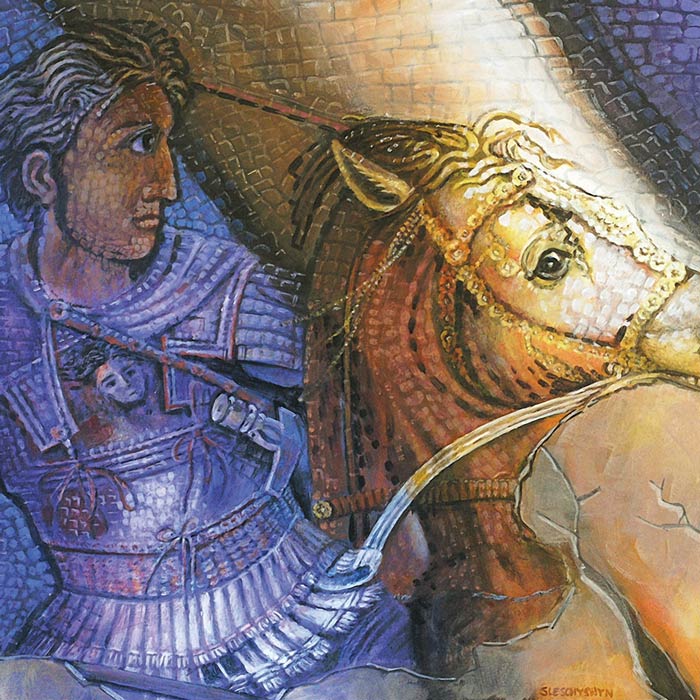 The source for this painting is a detail of the mosaic depicting the Battle of Issus between Alexander the Great and Darius III, ca. BCE 80 (House of Faun, Pompeii, Museo Archeologico Nazionale—National Archeological Museum—Naples, Campania, Italy).
Much has been written about Alexander’s legendary horse, Bucephalus—Philoneicus, a Thessalian, bringing a magnificent wild horse to Phillip II, Alexander’s father; Alexander publicly defying his father and claiming that he could handle the horse, where others failed to tame the stallion; Alexander naming his horse Bucephalus, which means Oxhead; Alexander and Bucephalus riding thousands of miles and fighting in many battles to establish the Macedonian kingdom.

Alexander viewed Bucephalus in the same way that his hero, Achilles, viewed his horses—immortal creatures given to his father Peleus by Poseidon, and in turn, given to him (Homer, The Iliad, Book XXIII). When the stallion died of battle wounds in June of 326 B.C., in Alexander’s last great battle on the left bank of the Hydaspes, Alexander founded two cities—Bucephala (modern Jhelum), named after Bucephalus, and Alexandria Nicaea (or Peritas, as in John Dryden’s translation of Plutarch [Alexander 6:1]) to celebrate his victory.