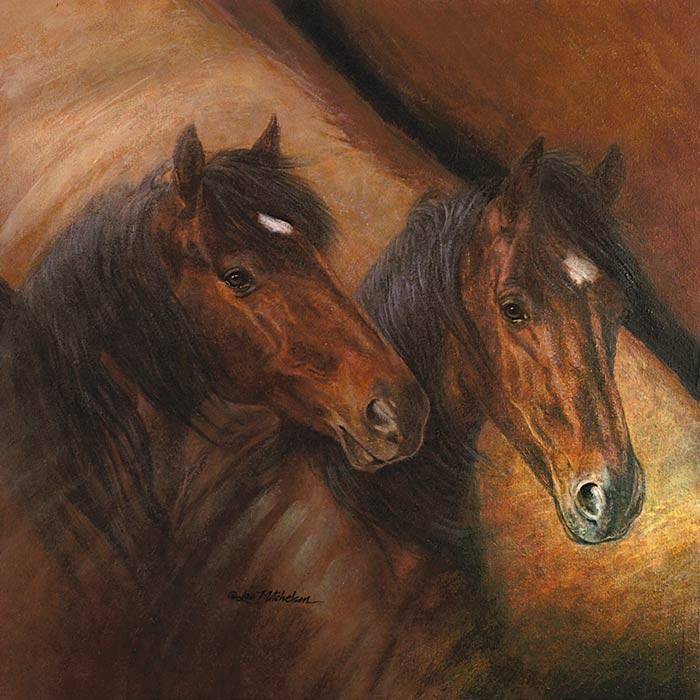 All of those evenings my children were enthralled by Little House on the Prairie, I would not have guessed I’d someday get to honor those endearing memories. My opportunity came in the form of a panel to paint for “Le Cadeau Du Cheval”, my subject, the Morgan horses owned by Almanzo Wilder, husband of Laura Ingalls Wilder.
This started me on an exciting quest for details. I found that Almanzo’s family traditionally had Morgan horses, apparently of the Governor bloodline. In Laura Ingalls writings she talked of Almanzo’s impressive matched pair of Morgans, how sparkling their presence, how full of joie de la vie! ( Exactly what you would expect of Morgan horses! )
My thanks to “Little House on the Prairie” historian, Nancy Cleaveland, of “Pioneer Girl”, Dean Butler, who portrayed Almanzo in the TV series and has a film about Almanzo in production called “Almanzo Wilder: Life Before Laura”, Rachael Lindsay Greenbush who played Carrie (with her twin, Sidney), western re-enactor, Wild Wes Lance, and professional photographer, Lori Faith Merritt. Lori captured the warmth and interaction between a lovely matched pair of Morgan horses and allowed me to use her photograph as reference for my tribute to “Almanzo Wilder’s Morgan Horses, Prince and Lady”.
Menu
Facebook-f Instagram Youtube Twitter
Copyright 2020 © All rights Reserved. Mural Mosaic Inc