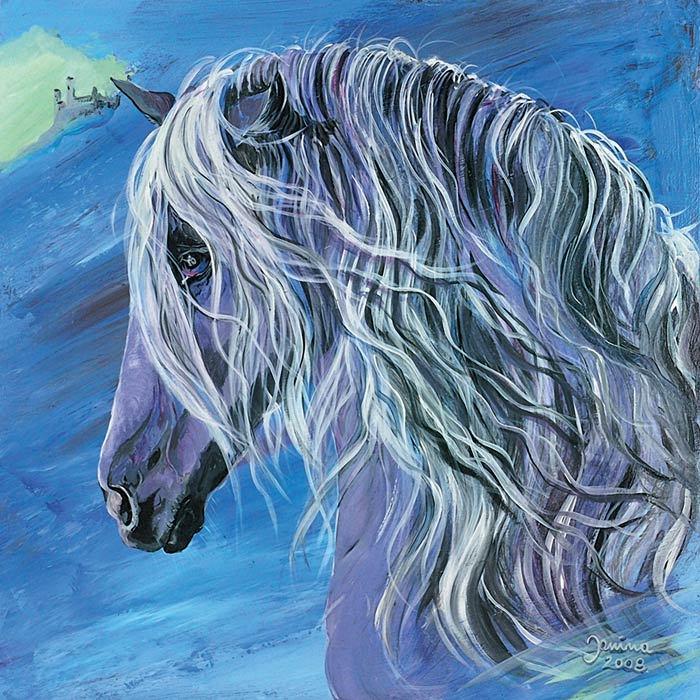 Fool! Dolt! Babieca! Thus was named the most famous horse in the history of Spain. In 11th century Spain, a famous order of monks, the Carthusians, were known for their horses. They were raised and trained by the order and were reputed to be the best throughout the Spanish Peninsula, their reputation even reaching as far as the Frankish and Norman nobles to the north and the Italian states to the west.
A young boy named Rodrigo Diaz de Bivar was brought up near the Carthusian monastery around Burgos. His godfather, a monk known as Pedro El Grande because of his large size, looked after the boy much as a father would and counseled him in matters both religious and practical. When the young Rodrigo came of age, his godfather granted him the pick of a herd of beautiful Andalusian horses. The boy could not wait to enter the corral and make his choice. After looking for a while, his eyes fell upon a white foal who, for some reason, stole his heart. The priest was astonished and disappointed and called the boy to task for choosing such a frail and poorly formed figure of a horse. Rodrigo defended his choice and named him Babieca, my stupid one, the name that had been shouted at him for being, in the eyes of his godfather, such a poor judge of horses.
Babieca became an imposing white standard of the Andalusian race, obedient and nimble; noble and of generous spirit. He soon grew into a formidable charger, a frightening machine of war. He carried his master courageously into all battles for thirty years, each time towards victory. His name was legendary and he was spoken of with awe and reverence.
So vast was the renown of Rodrigo Diaz de Bivar that his Saracen enemies paid tribute to his prowess as a skilled warrior and bestowed upon him the title of El Cid Campeador which in Arabic means My Lord, the Champion of Warriors.
Rodrigo Diaz de Bivar went on to capture the city of Valencia, one of the last Moorish strongholds in Southern Spain. He took up residence in this former Saracen capital, departing its gates from time to time on brief sallies against his adversaries who had laid siege to the walled city. Mortally wounded in a fruitless skirmish outside its walls, he made his way back again through the city’s gates at great effort and was laid upon a bed where his wounds were treated. The attempt to keep him alive proved to no avail and El Cid passed away before nightfall. Knowing that the Moors would attack the city in full force when the news of his death was known, the next morning his league men dressed his lifeless body in his armor and tied his lifeless corpse astride his famous steed Babieca. Thus propped upon his faithful charger with his famous sword Tizona clasped in his right hand in an avenging gesture and with a crimson cross blazoned across his breast, Babieca carried his dead master at the head of his troops at full tilt against the Saracen hosts. Like foam against the prow of a mighty warship, the panic-stricken Moors parted before him and fled for their boats, thinking that El Cid had been miraculously raised from the dead to continue the struggle. Not even the fanatical Moorish leader, Ben Yusuf, could urge them to stand against this white knight and his powerful charger Babieca while his wife and children watched fearfully, yet proudly from the ramparts. In death, as in life, El Cid had saved Spain from the invading hordes of Islam. He and his mount had become unconquerable heroes and lasting symbols of national pride as they gallop off into legend.

One who fills them with dread,
Grown much larger than ever,
Who rides on a white horse,
A crimson cross on his breast,
In his hand a white banner,
His sword looks like a flame
To torment the Moors.

After the death of El Cid, Babieca was never mounted again and died two years later at the incredible age of forty. His master had asked that his wife and famous steed be buried with him at the Monastery of San Pedro de Cardeña. But unfortunately their remains were removed after the Peninsular Wars and taken to the cathedral in Burgos where they were finally interred and where they currently rest today.
The Andalusian breed of horse has a long and distinguished history. Developed in the Spanish Peninsula, it was a blend of the Arabian and Berber horse with some admixture of English blood. Their fame spread as formidable mounts in the Iberian cavalry of the Carthaginian army that fought against the Roman legions who in turn captured and bred them to help conquer the known world. They soon became the standard by which all warhorses were measured and were prized for their agility, temperament, endurance and depth of character. It is a pure bred that has great stamina coupled with its stance, power and the rhythm and grace of its movements. It has always instilled in spectator and rider alike a feeling of grandeur.

All copyrights to “The Supreme War Horse of Spain”, written by John Reismiller